Open to all but with an emphasis on North side residents, the space was held by Marnita’s Table with support from the Catalyst Initiative of the George Family Foundation and in collaboration with 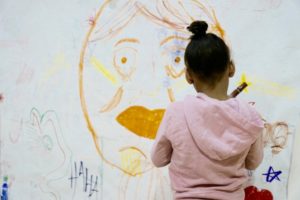 Guests selected from three sessions that day. Each took a different approach to health and wellness practices. A Himalayan Yoga session led by James Ford brought peace and relief to those who participated. A Healing Drums lesson taught by Samba Fall of the Multicultural Kids Network was a favorite amongst the small children. Lessons from the Elements guided by Ras Sol focused on healing crystals and the medicinal elements that they possess. In each session both children and adults learned both preventative and restorative practices to better their health.

Throughout the day therapists and holistic healers were available for guests. Those who left this room were encouraged to do an exercise and write down something 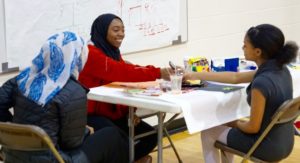 they needed to release out of their bodies and into the world. This practice is called “Let it go” where a person writes down something that has been weighing heavy on their mind, body, spirit. Once recorded, it is placed in a basket as a way to symbolize that you have “let it go” from your body. After the event was over the team at Marnita’s Table held a ceremony, burning each and every paper without reading the content. Using sage, we performed a blessing the contents of the basket before lighting the notes and releasing them.

Two additional rooms were used specifically as a quiet space and also loud space that could remain open and be a source of release. Most of the children found the loud room to be a source of refuge. Drawing on the walls, young people found expression through art. What we had intended to be a r

After each session ended guests returned to the main community room. A community open mic allowed everyone who wanted the opportunity to express themselves the option to do so. Displaying talents of all sorts, young girls found their friends and sang a favorite song, while more seasoned artists also found their way to the stage with rehearsed material that suited the themes of the day. Comedians and poets were also among the list of those who performed. It was a chance for guests to tell their story and express themselves, in a personal and unfiltered way.

Shortly before the open mic ended guests gathered into Circle Share-In and each person turned to their right to tell their neighbor something they have always wanted to hear about themselves.

Breaking Bread and the delicious feast they provided made the large school space feel like home. New friendships were made and old friends reconnected in a way that most would at a family gathering. The day was filled with joy and appreciation for community.